Audio restoration is a process used to reduce noise such as hiss, crackle, hum, etc. from audio recordings. Most modern techniques of audio restoration are performed in the digital realm on audio from an analogue source. The removal of unwanted sounds is usually performed in DAWs (Digital Audio Workstations) however there are also digital standalone de-clicker's, de-noiser's and dialogue noise suppressors. Although there are automated solutions, audio restoration is still a time consuming and complex process that often requires experienced audio engineers with a background in audio post production. 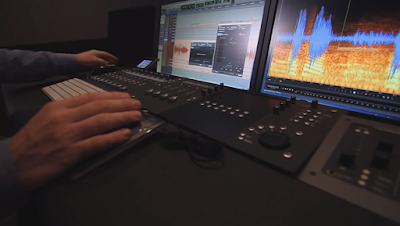 Record Restoration is a particular kind of audio restoration where the audio is converted from the analogue signal on a gramophone record (either 78, 45 or 33⅓ rpm). First the record is cleaned to remove surface noise that can be caused by dirt, then it is transcribed into the digital realm, where software is used to adjust equalization and volume. This from of audio restoration is however rarely used and gets harder the older the record is, due to the nature of the medium (playback causes gradual degradation of the recordings). 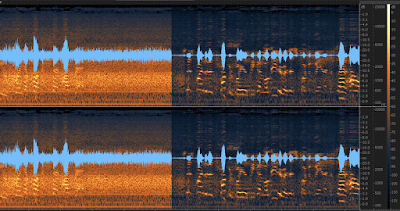 Above is a before and after shot of an audio recording that has been processed with the popular de-noising/de-hissing tool izotope RX. As you can see, the waveform has changed fairly drastically which would be represented in the improvement of the audio quality. Izotope RX is an extremely effective tool for removing a static noise or hum. It works by analysing a sample of the noise selected by the user. It then 'learns' the noise and subtracts it from the entire clip, often to inaudible or negligible levels.

Audio restoration is more than just adjusting volumes and de-noising files, it can have a huge impact, depending on what the audio is used for. We have worked on a number of projects where clients had potentially incriminating audio recordings but the audio quality was so poor that nothing could be understood. Audio restoration brings out the voices in spoken word recordings so that they can be transcribed and used as evidence in court. Clean audio can make a real difference and can very well be used as damning evidence or proving your innocence.

Click here for more details about how our music studio can help you with your audio recordings!
Posted by Unknown at 04:00

Unit 36 Curtis Industrial Estate, North Hinksey Lane, Oxford OX2 0LX
Tel: 01865 236117
Click here for Company Website
CLICK HERE TO ORDER CD FOR MASTERING ONLINE
STUDIO RECORDING
We offer audio recording through Pro Tools HD10, GSSL mix bus compression and Neve summing. We have three acoustic spaces for recording audio including Oxford's largest drum room.
MIXING & MASTERING
Recorded audio is mixed and mastered through pro-analogue gear and dedicated plugins from Waves, UAD, fabfilter as well as many other companies. Music recordings as well as spoken voice recordings can be edited and the audio enhanced professionally using this equipment.
SOURCE CONNECT
We offer Source Connect to link studios around in different cities (or even around the world!) to the Oxford studio.
RESTORATION
Our studio offers professional digital restoration to restore any audio in any format to its highest fidelity. Our clients are UK wide and our restoration has been used by the judiciary.
CD DUPLICATION
We can replicate your master CD DVD or USB. We design the packaging for you or work with your brief for a bespoke design.
CONVERSION
Film, Video and Audio Tape conversion specialists. Our clients include Oxford City Council, The NHS and University of Oxford